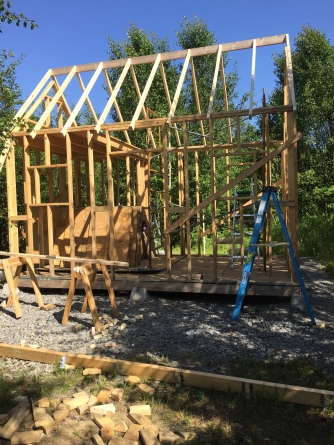 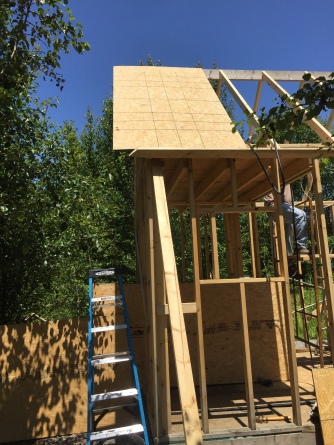 The day began simply enough: cool air, soft light. We were tired from the previous day’s work but motivated and optimistic.

Our neighbors, ever generous, let us use their electricity so we could plug in the air compressor for our nail gun. It’s so heavy-duty that I can’t wield it with any accuracy. Then again, I’m not all that strong.

Chuck hoisted the panels from the ground, and I stood in the loft to guide them into their proper place. A 2″ x 4″ acted as a lip the panel could rest against until we nailed it up. The first three panels Chuck nailed while standing in the loft. 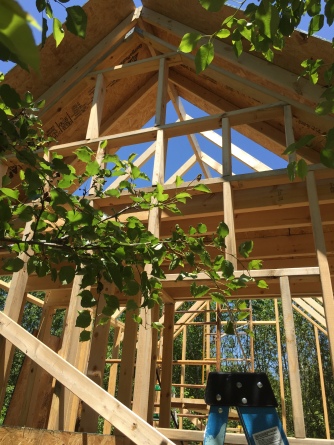 We took a break and debated whether we should do the 4th panel with a ladder or take apart the scaffolding inside the cabin and reassemble it outside.

We had been up and down ladders all week, and we always did so with a great deal of care. Nevertheless, I now understand the expression you can never be too careful.

The board went up easily, and I stepped inside the cabin to make sure that Chuck’s nails were going into the rafters and not simply through the panel. All went in perfectly. He was coming down the ladder, and I heard him say, “I’m going to fall.”

Just writing those words makes me break out into a sweat all over again. I saw him mid-fall, and then he hit the gravel and rolled. My memory here is spotty. He sprang up, which surprised me, but then he looked as if he would pass out. He sat down on the floor of the cabin, and I had him lean back. A stream of blood dripped from his head. I yelled for help as I dialed 911 with one hand and held his head with the other.

Our neighbors, who were thankfully outside at the time, came running. Amy brought a towel and John gave me their address–I had forgotten ours since we technically don’t have one yet–and their boys stood by the road to flag down the ambulance, which would not have easily found us otherwise. (I shudder to think that I might have had to leave Chuck alone to run the 100 yards to the road.)

Meanwhile, we began asking Chuck questions to keep him awake. He knew who I was, but he didn’t know the year. He knew who was president, but he had no idea who was currently running for office (which, I’ve been told, is not the worst thing to forget). He didn’t know how he fell, and he kept asking where he was, how he got there, and why his head hurt. The blood gushed from near his eye; the cut was long and deep. I had no idea if any bones were broken or how hard he had hit his head.

Amy did her best to comfort me as she and a friend drove me to the hospital. When I next saw Chuck, he was slightly more aware, neck in a brace, rivulets of dried blood across his face. As they were wheeling him off for a long CT-scan. I heard him ask the attendant, “Is my wife okay?” It made me laugh through the tears, and I’d like to think that was the point when I knew he couldn’t be too terribly hurt.

Still, I sat in the empty ER room alone, the florescent bulbs casting everything in a sterile, cold light, all of the room’s carefully-chosen trappings without purpose, and I realized that without Chuck, my life would very much feel that way.

I didn’t have to dwell on these thoughts long, thankfully, as his boss (and friend), Terry, showed up only moments later. Soon after, a close colleague arrived, and then family–including his best friend Danny, who drove us home.

To briefly summarize three long hours, we found out that Chuck has an orbital fracture but not a concussion. The doctor did an excellent job sewing up the gash–thirteen stitches in a crescent shape around his right eye. He was told to rest for two weeks.

He’s black and blue, with a hematoma in his right arm, but after nine visits to various doctors and the chiropractor, he is walking fine and feeling much better.

We would, of course, like the cabin to be finished, especially before the summer heat sets in. But first there are more important things to rebuild. And plenty to be thankful for.