This week we spent three days at the land with a long list of minor and major tasks. The weather was on our side, considering it was late June. Though it reached 90 degrees a couple days, the heat index stayed under 100. One day was partly cloudy, and another had a breeze. We arrived early with the intention of quitting at lunch, but we were able to work longer without exhausting ourselves. 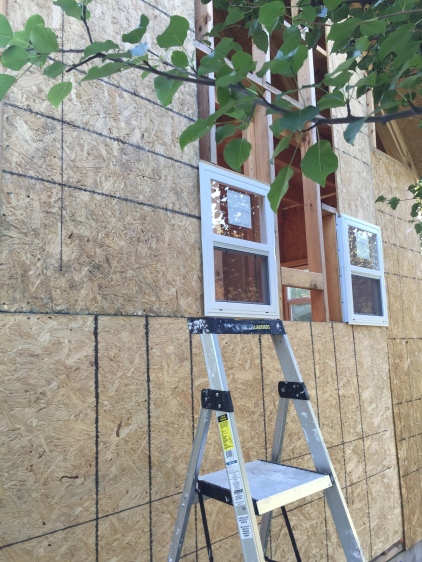 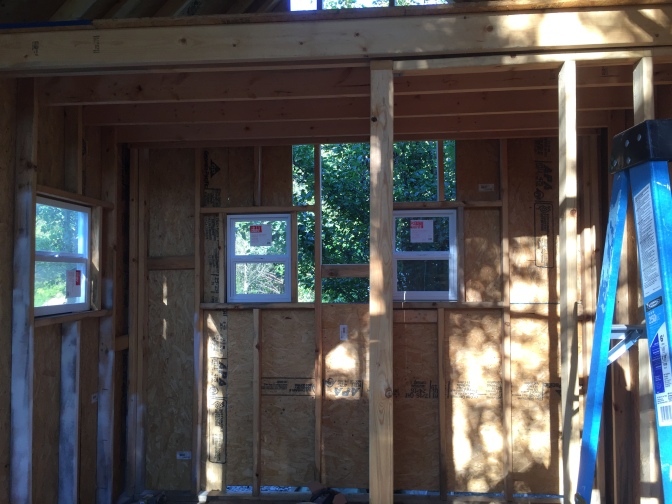 We made a big purchase this week that sped up progress: a generator. Our neighbors have been generous in letting us link extension cords to use their electricity, but we decided this would be a good investment to make sooner rather than later.

Aside from a few small patches high on the side walls, we accomplished all of our goals. Chuck’s dad came on Tuesday and Thursday. His know-how amazes me. Where I might hesitate on deciding the best plan of action, he acts. And once he shows me how to do something, I am more confident in my actions, not to mention more efficient.

We also plan to do pink insulation between the studs, but the foam board will create a tighter seal and add additional insulation. 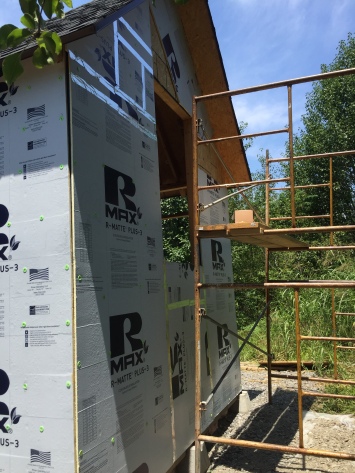 I enjoyed being on the scaffolding–again, I’ve had lots of monkey-bar experience. I’m also more comfortable wielding the nail gun. Over time, my arm muscles have strengthened and my fear of the nail gun has waned. I’m happy to leave the sawing to Chuck. He’s also much better at making a pattern with the foam board nails, which will be helpful later when we’re nailing up the cedar shingles on the front and the siding on the other walls. (The panel I nailed looks like it was done by a sawed-off shotgun, and I used twice as many nails as was necessary.)

Next week the temperature will soar to 100–perfect for swimming in Lake Beaverfork or reading a good book in air conditioning. We also have tickets to see the Arkansas Shakespeare Theatre‘s Romeo and Juliet and West Side Story. We’ve already enjoyed the outdoor A Midsummer Night’s Dream but missed Twelfth Night, which was sold out this morning! We’re anxious to finish the cabin, but we’re also trying to find balance.

We’ll work at the land tomorrow before family comes in for the 4th. Hopefully, by the end of next week, we’ll have the trim up and at least some of the cedar shingles.