Several people have asked when the cabin will be finished. Well, it’s hard to say. When it’s 100 degrees with a heat index of 111, I’d rather tackle some of the 10,000 other things on my “to do” list, not to mention catch up on my freelance editing.

But since my brother Jared was coming in from Oklahoma and volunteered–that’s right, volunteered!–to help, we braved the heat. That week, at least, we had one day at 91 degrees, though another had a heat index of 107. By the time the heat became unbearable, however, we were so focused on our game plan that it didn’t slow us down. We arrived between 7 and 8 each morning and didn’t stop until sometime between 1 and 2.

First step: staining the siding. After staining the first sheet on our hands and knees, we decided to save our backs and carry the sheets to the sawhorses. Chuck framed out the sides of the house and made a run to the hardware store. I can’t remember what we needed, but it never fails that the first day has a few hiccups. 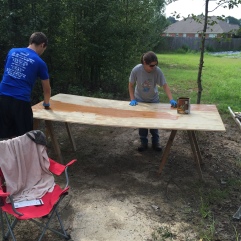 I also showed Jared how to hang the cedar shingles. I had a system for fitting them together, but he improved on it. At first we worked as a team, and then it became clear he’d be faster by himself with me trimming boards when needed. 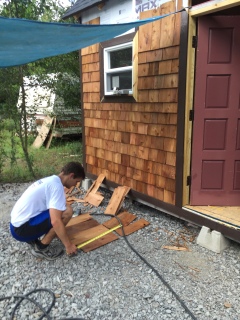 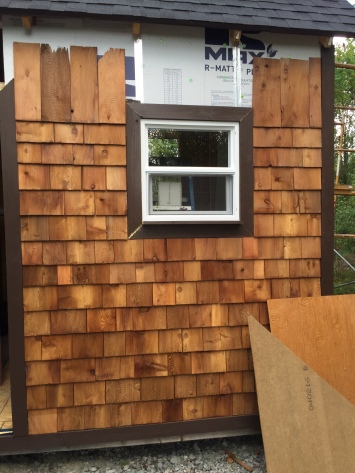 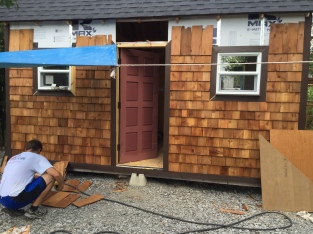 But our main focus was getting up the siding since there were three of us. Jared and Chuck lifted the panels into place and I made sure the bottom went over the lip of the trim and then pushed from the side until the siding locked with the piece next to it. 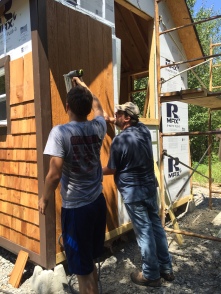 What’s up next? I’ll finishing painting the underside of the eave and try not to get paint everywhere. In hindsight, I should have done that before the siding was in place. Chuck will frame out the window and we’ll move the scaffolding to the other side. Our goal is to have the exterior completely done by the end of August. That leaves the inside, which we can do little by little, as time and school permit!