After posting grades, Chuck and I went to see a couple movies and then outlined our cabin goals for the break. We had two nice days before Christmas and two the week after, during which we were able to nearly finish the exterior.

Meanwhile, Chuck, his dad, and my stepson Geoffrey worked on framing the transom window and trimming the front door to fit with the weather strip. The transom window might not have taken so long, but the glass was slightly too big. All we can guess is that some settling had occurred since we measured and ordered the glass months ago.

My brother Jared was able to help after Christmas. He’s really great at putting things together, especially when the pieces have to fit a certain way. He is also the only person I’ve ever known to successfully build a house out of cards–and one that supported weight. He was nine.

While Chuck installed the doorknob, Jared and I finished the shingles. Maybe it was the cutting, or maybe it was the wood, but we ended up with a couple dozen splinters each. Those took a bit more engineering to remove than the shingles took to put up.

We then moved to the side of the house. We finished the OSB with the random pieces we had and then put in the loft window. Our next move was to tack up the foam board. I painted the trim, and while it dried we covered the windows with plastic and painted the eaves. 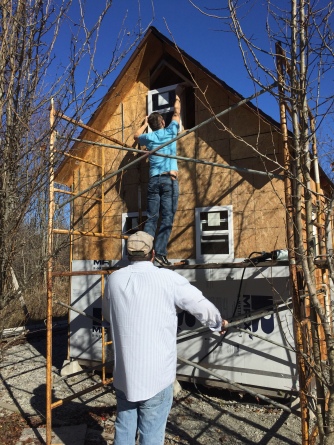 We then nailed up the trim so Jared could begin the puzzle of matching the siding with other pieces.

Chuck and his dad got the back door hung, but we will still need to make some adjustments. The great window was close to being finished, but we had forgotten our plan to use the 1″ trim to frame it. The 1/2″ that they used was not quite wide enough to hold the glass in place.

We were running out of time: as soon as the sun sank behind the treeline, it got cold and increasingly hard to see. We were so close to our goal of finishing the exterior. Still, we were happy with what we had accomplished, especially compared to where we were just one year ago: