A month ago we picked Saturday, May 20th for Chuck’s cousin Scott to come down from Northern Arkansas and help us insulate and finish the tiny cabin ceiling.
In spite of a 100% chance of rain and two snakes (in passionate embrace or bloody murder) inside the cabin earlier in the week, we were not canceling.

One road into Higginson was flooded; the other was puddled but passable. Some roofs were still covered in tarps from the tornado that blew through a couple months ago. (Sometimes I wonder what plague-ridden place we’ve chosen for a simpler life.)
Scott, who roofed the cabin for us last June, has the muscle memory to do in one hour what would take us all day. He put the insulation on his back, and as he went up the ladder, slid the insulation in place until his head was supporting the last segment. 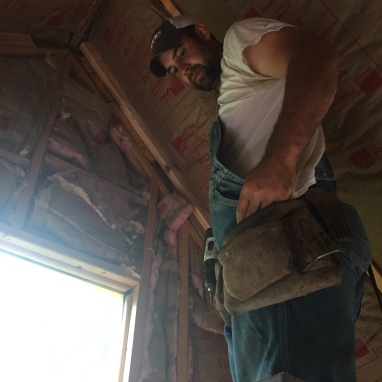 While the insulation is squeezed between the studs, gravity is still at work. Chuck, on a smaller ladder, stapled the bottom half of the insulation while Scott stapled the top half. My father-in-law (Charles Bane, Sr.) sliced the insulation to fit–each piece was about 9″ too long. I mainly swatted mosquitoes–“big enough to pick up a child,” as Scott said–and watched. 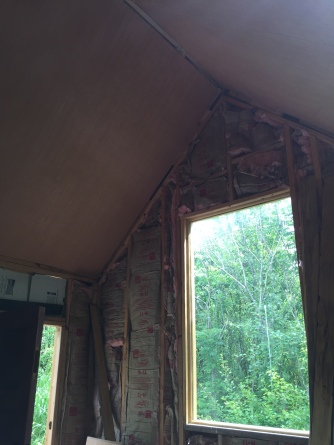 By early afternoon the ceiling was complete–mission accomplished!
We’ll still need to run a strip of wood up the middle to hide the seam between the two sides of the ceiling. The wood’s light color makes the cabin feel spacious and airy. As much of a pain as the steep roof has been, it’s the reason the tiny cabin doesn’t make me feel claustrophobic.
This week Chuck finished the shed and we started moving things out of the cabin. We still have cleanup and organizing to do, but we’re over a hump. With the shed in place, we can set up the compost bin for the toilet. We still need to dig a trench, run the pipes, and install the toilet–our next big hurdle. 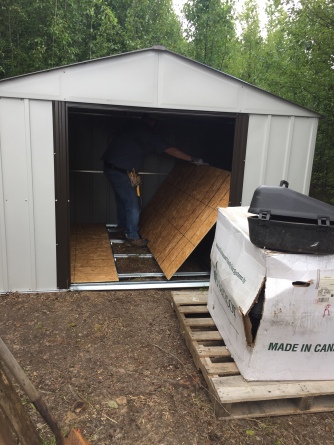 One thought on “Tiny Cabin: Ceiling”