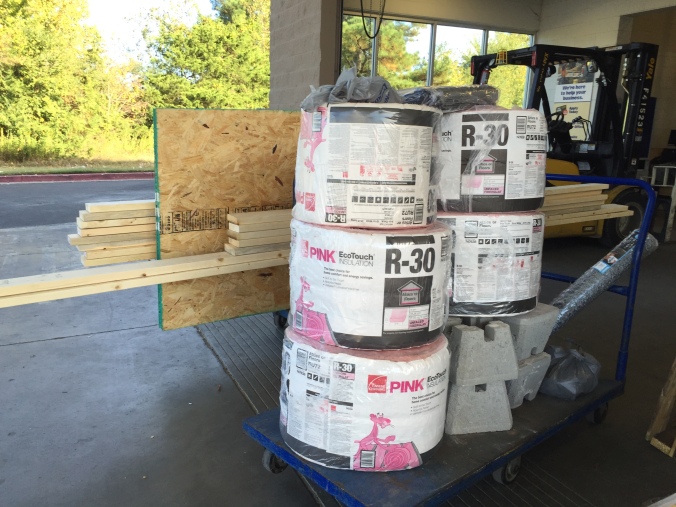 We added gravel to raise the back left corner and then put a 2’ x 4’ x 16’ board between them. We then placed the level on the middle of the board. If the bubble lined up, we knew they were the same height. We were surprisingly good at judging how much gravel to add to make the four pillars the same, but the deck blocks themselves were rarely level on all four sides (the smaller the space to level, the more difference one millimeter makes). Chuck raised the heavy block while I added anything from stones to a fine layer of gravel dust. We also had to make sure that the surface was packed down well to reduce the chances of the block shifting.

It was time to nail the boards together. We started with the same back corner. Chuck drilled holes first to make driving the nails easier. I held the boards and flush as possible as he nailed. We repeated the process until we had finished the outside perimeter. One of the boards split—the nail probably hit a knot in the wood—so Chuck reinforced it on the outside with additional nails. We might have replaced it altogether had the other end of it not already been nailed to the back board. 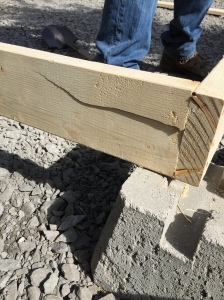 Luckily, it’s not as bad as it looks.

We then used the square (an L-shaped ruler) to make sure the boards had gone together at a perfect right angle, which is harder than one might think. I held the long end of the ruler flush against the 2’ x 4’ x 16’, which we had decided was the board by which the angle would be measured. In a perfect angle, the short end of the L would fit perfectly up against the other board. In our case, however, the end of the ruler made contact with the board, preventing the rest of the ruler from making contact. It was about a millimeter off.

All is not lost when this happens. Chuck took the rubber mallet and hit the wood while I held it tight (obviously, we didn’t want to hit the wood while it was sitting in the carefully-placed deck block). The mallet bends the wood ever so slightly, and we were able to get more of the square flush against the board. It wasn’t perfect, though. Still, all is not lost: later, when we nail the plywood (or OSB) down to the frame, it will help cinch the discrepancies.

Between crouching, lifting, and concentrating, we were pretty worn out by the time we finished, nearly five hours after we started. We had hoped to put in all the cross-beams, but instead we had to cover them with the tarp and leave them for another day.